Learning from The Grinch

All of us have holiday memories of family, friends, service to others, and many more memories of days gone by. I have plenty of memories of presents as a child, but also very special memories of delivering gifts to prisoners’ families in Atlanta that touched my heart over the years, too. One of my favorite holiday TV specials is still Dr. Seuss’ How the Grinch Stole Christmas. The TV special originated in December of 1966, and it is still a favorite over 50 years later. 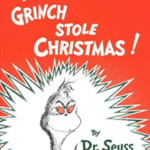 I’m not sure if it was my favorite for the ornery nature of the Grinch, for unforgettable music that I often sing after watching the TV reruns (“You’re a wise one, Mr. Grinch …..”), or for the witty sayings that come from the show (You’re a foul one, Mr. Grinch, You’re a nasty, wasty skunk, Your heart is full of unwashed socks, your soul is full of gunk, Mr. Grinch …. The three words that best describe you are as follows, and I quote:  Stink, stank, stunk!). Even on through my college years we always had fun with music and sayings from the Grinch, and who hasn’t been accused of being the Grinch on occasion? I know I certainly have earned that label at times.

When you review the history of how the Grinch was created it is interesting. Ted Geisel, the original creator of the Dr. Seuss books, became friends with Chuck Jones, the animator, during WWII. It was a difficult task creating the original cartoon version, and The Grinch was one of the most expensive animated shows for its time in the 1960s. Like any cartoon, the characters created also became the carriers of the message for the cartoon. No doubt this was true with The Grinch, but it seemed especially true for Max, the Grinch’s devoted dog friend, and Cindy Lou Who, the adorable daughter of the Lou Who family.

What Can We Learn from The Grinch?

There are many lessons from The Grinch, and these lessons cross different cultures who celebrate the holiday season in multiple ways. Here are a few of the lessons that are special to me:

Max, the Dog, and Unconditional Love

Max is The Grinch’s dog, and through the show Max is the audience’s point of view. The Grinch is often mean to Max, but he still loves The Grinch unconditionally. As Chuck Jones noted, “Max represents all of us. He is very honest, very decent, and a very put-upon dog.” Max’s agape love teaches us to be kind to everyone because deep down inside we are basically all the same.

Look for Ways to Grow Your Heart During the Holiday Season

Like the Grinch, whether your heart is two sizes too small, or your shoes are too tight, there will always be times when we dislike the holiday season. Just like the Grinch, who always hated the singing in Whoville, sometimes the music can cause our hearts to grow. So no matter how crazy and busy the holiday season can become for you, look for ways to grow your heart during the holiday season by giving to others. I will never forget the tears of a mother, whose husband was in prison, when we showed up at the door with presents for her children. When she quietly told us those were all the presents her young children would receive that year, her tears grew my heart in multiple ways.

Reach Out to Your Community During the Holiday Season

The Grinch made a point to take every last thing from Whoville when he raided their houses. He took the presents, he took the tree, he took the decorations, and the very last thing he took was the log on the fire. Did that stop the Whos from singing as a community? Did the Whos still come together as a community to celebrate their community? Of course they did, and the singing from Whoville caused the Grinch’s heart to grow, changing him forever. The Whos didn’t need the material things of the holidays to make them special. The holidays come but once a year, and the essentials of the season include coming together as a community and giving back to those in need. This giving back sustains us for the rest of the year.

See the Holidays Through the Eyes of a Child

Cindy Loo Who has always been one of my favorite characters from The Grinch. Her cute smile, her innocent look and her forgiving eyes are tough to forget, and the animation created her in a beautiful way. If the stress of the holidays, or all the tradition wears you down during the season, imagine the holidays through the eyes of a child and it will make you smile. We all have different ways to celebrate the holidays, but refreshing our spirit and seeing the holidays with the wonder of a child can only help us during down times.

When You Work, Only the Love Should Show, Not the Work

Chuck Jones, the animator for How the Grinch Stole Christmas, said these words at a 30-year celebratory event for the show in the mid 90s. He felt the show revealed that love, and the show has continued to do that for decades. Christmas, and many of the holidays celebrated during this season, are about love and peace for mankind. We should share that love and peace with one another, not only during the holiday season, or on Christmas Day, but every day.

I hope you enjoy your holiday season in your own special way. I also hope the message from The Grinch will ring true for you this holiday season and in the months during the coming year.